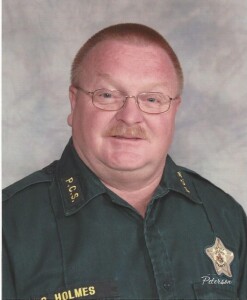 Glynn Charles Holmes, 66, passed away peacefully on Saturday, September 12, 2020 at Baptist Hospital in Little Rock.  Known to many as “Monkey”, Glynn was born on September 16, 1953 to Charles and Velma Holmes.  Being a pastor’s son, he lived in several towns across Arkansas growing up.  In 2001 Glynn married Peggy Smith Bailey because he “just loved her”.

Glynn was a long time member of Law Enforcement, servicing for over two decades in departments at Carlisle, DeValls Bluff, U.A.M.S. with the majority spent with his beloved Prairie Count Sheriff’s Department.  He loved law enforcement, working with long time friend, Rick Hickman and the opportunity to help someone out.  He especially enjoyed his time spent serving in the court system building.  He had a special bond with judges, lawyers, court reporters, and his one and only Gaylon Hale.  Glenn also served as usher and security for Carlisle First Baptist Church for many years.