Conley House, 87, of Austin, TX died Jan. 17, 2014, with his family at his side. He was born Jan. 6, 1927 in Hazen, AR to the late John and Cecil House. He graduated from Hazen High School, Alabama School of Technology and Draughton’s School of Business and Real Estate. He was married to June Edmondson House and they have one daughter, Becky.

Prior to moving to Austin in 2010 to be closer to his daughter and grandsons, Conley was a civic leader and devoted volunteer. He was president of the Hazen Chamber of Commerce for three terms. He served on the Hazen City Council for two terms and the Prairie County Equalization Board and the Criminal Detention Facilities Review Committee for Prairie and White Counties. He was also president of the Hazen Kiwanis Club. 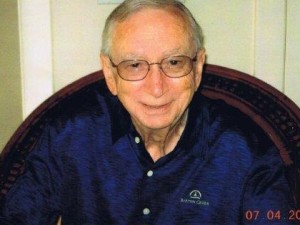 For six years, he was a salesman and manager for Snap-On Tools, winning its coveted “Salesman of the Year” award his first year. With the exception of these six years, he was a small business owner and operated a service station, a wholesale oil company, a supermarket, a small manufacturing company and a hardware store.

Conley was an active member of First Baptist Church until his move to Texas. As a young man, he was Sunday School superintendant. He was also a deacon, deacon chairman and a Sunday School teacher for decades.

Visitation will be 5-7 pm Friday at Westbrook Funeral Home in Hazen. A memorial service will be at 10:30 am Saturday at First Baptist Church, Hazen with burial at Carlisle Cemetery.