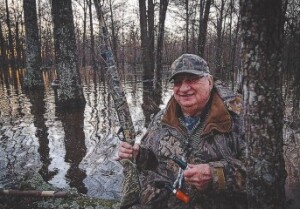 Rice farmer, avid sportsman and local community leader Steve Chlapecka Jr., whose smile and laughter was known throughout the Grand Prairie, died on July 6, 2021 in Hazen, Ark. He was 86.

Steve was born on April 3, 1935 in Slovak, Ark. to Olga and Steve Chlapecka Sr. who preceded him in death. He was also preceded by his sister, Marie. A 1954 graduate of Hazen High School and second generation rice farmer who had a lifelong passion for duck hunting, Steve cared deeply about his family and giving back to his community.

He is survived by the love of his life and wife of 65 years, Reta, and three children, Donna (James Coleman), Steve (Allyson) and Nancy and two sisters Dorthy Riddell and Angie Simpson. He relished his role as Papaw to three grandchildren, Steven Chlapecka, Caleb Coleman (Becca) and Jordan Chlapecka and two great grandchildren Cailey and Livvy Coleman.

Known to many as “Big Steve” both due to his stature and to his generosity to friends and neighbors, he was a beloved member of the Hazen community. So much so that Steve’s school yearbook said: “What would London do without Big Ben? What would Hazen do without Big Steve?”

When farming wasn’t enough to keep him busy, he found plenty of time to give back to his community. Steve served on the Hazen School Board for 15 years, Hazen Fire Department for 30 years, the Riceland Foods Inc. Board of Directors for 18 years, and Riceland Foods Hazen Branch Board of Directors for 40 years. He also served as a member of Prairie County Sheriff Patrol Volunteer Auxiliary and the Jaycees. Steve was a faithful, lifelong member of Emanuel Lutheran Church in Stuttgart.