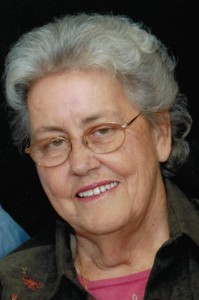 Mary Alice McKenzie, age 76, of Furlow passed away on October 27, 2014. Mary was born on November 8, 1937 to Lawrence Edward Floyd and Blanche Layton in Biscoe. She was married to Bruce McKenzie on December 8, 1957 and they made their home in Fort Worth, Texas for four years. They then moved to North Little Rock where they lived for 32 years. They presently reside in Furlow, Arkansas. She was a member of Calvary Baptist Church in North Little Rock for 32 years. She was a wonderful mother and homemaker. She worked as a doctor’s assistant in her early career and later on for H&R Block, retiring four years ago. She dearly loved her animals, loved to travel, and also loved sports, especially when watching her sons play.
Mary was preceded in death by her parents, her father-in-law and mother-in-law, Curtis and Vergie McKenzie; four brothers and three sisters.
She leaves behind her loving husband of 56 years, Bruce McKenzie; her two sons, Scott McKenzie of North Little Rock and Greg McKenzie (Lisa) of Furlow; six grandchildren and five great-grandchildren. She is also survived by one brother, Robert Floyd of Biscoe, and one sister, Dorothy Carroll of Beebe.
To celebrate her life, there will be a visitation on Saturday, November 1, from 12:00 to 2:00 P.M., with a funeral service to follow at 2:00 P.M. at the First Baptist Church of Biscoe, 444 No. Dixon, Biscoe, Arkansas with b
Brother Robert McDaniel officiating. Burial will be at the Hazen Cemetery, Highway 11 South, Hazen, Arkansas following the service.  Pallbearers will be Ronnie Schroeder of Hot Springs, Lawrence Meyer of heber Springs, Richard Carroll of Benton, Randy Schroeder of Alexander, Brian Schroeder of Stuttgart and Jim Rabeneck of Stuttgart.   Memorials may be made to the Lonoke City Animal Shelter, Arkansas Hwy. 31, Lonoke, Arkansas 72086.
Funeral services entrusted to Westbrook Funeral Home, 183 North Livermore St., Hazen, Arkansas 72064.