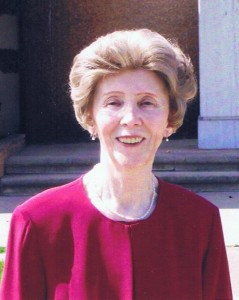 Catherine Leffin Proctor, 89,  of Hazen, died November 7, 2014.  She was born August 20, 1925 to Jean and Matilda (Hoen) Leffin in Eupen, Belgium.  She attained a chemical technology degree in Aachen, Belgium in 1944.  During the war she was employed as a chemist in a chocolate factory.  She married C.S. Proctor on June 15, 1946.  They settled in Hazen, Arkansas, and her parents soon joined them.  She has two sons, Bruce Proctor (Pat) of North Little Rock and Charles Proctor (Sara) of Hazen.

Catherine always worked in the family business.  Their first enterprise was a gas station which included the bus stop and in 1949 they established Proctor Tire Service.  She was an astute businesswoman and continued to work well into her 80’s.

Catherine was an active member of St. Cyril & Methodius Catholic Church in Slovak.  Her many activities included altar society, flower committee and making banners for the church.  She was instrumental in promoting CYO and Search programs for Catholic high school students in Arkansas.  As an adult sponsor,”Ms. Katie”, worked tirelessly to ensure the Catholic teens had opportunities to develop and share their faith with others.  The diocese recognized her contributions with the For God & Youth Award in 1977.  She enjoyed opera, ballet, and classical music.  It was her delight to introduce many young people to these interests over the years.

Catherine is survived by her sons, Bruce and Charles, and grandchildren, David, John, Christen, and James.

Visitation will be Sunday, November 9th from 4 to 6 p.m. followed by a rosary at St. Cyril & Methodius Catholic Church in Slovak.  Funeral mass, officiated by Rev. Phillip Reaves, will be Monday, November 10th  at 10:00 A.M. in Slovak.

Special thanks to Dr. Chris Morgan, Mr. Bobby Glover, and the staff of Chambers Nursing Home for their kindness and care during her final years.

In lieu of flowers, memorial donations may be made to St. Cyril & Methodius Catholic Church or Alzheimer’s Arkansas.