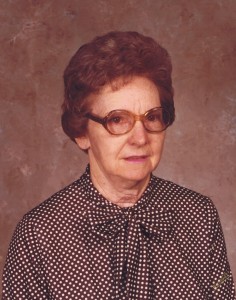 Lula Marguerite Greenwalt, 92 of Hazen, passed away on April 10, 2014 at Crestpark Retirement in Stuttgart due to an illness.
She was a born again Christian and a long time member of Calvary Baptist Church of Hazen.
She was preceded in death by her parents, Margaret Louise Bloomhart Booth referred to as “Mamaw” and Minor Forrest Booth referred to as “Yank”; her husband, Morris Edward Greenwalt; two sisters, Ona Booth and Nell Booth Reid and four brothers, Edwin Booth, Forrest Booth, John Booth, and Richard Booth.
Marguerite is survived by her son, James Morris Greenwalt of Hazen; her daughter, Elsie Marie Greenwalt Bohanan and husband, Ray of Stuttgart; two grandsons, Derek Ray Bohanan and wife Jenifer and Monty Edward Bohanan and wife, Jennifer both of Stuttgart; four great-grandchildren, Loren Elizabeth Bohanan, Molly Marie Bohanan, Rhett Bohanan and Landon Frizzell.
Marguerite showed great endurance for multiple adversities and challenges at various stages of her life, especially at the end when the Lord called her home to what we believe was a great family reunion.
Funeral services will be 2:00 P.M., Monday, April 14, 2014 at the Westbrook Funeral Home Chapel in Hazen. Visitation will be from 1:00 to 2:00 P.M. prior to the service. Burial will be in the Center Point Cemetery.