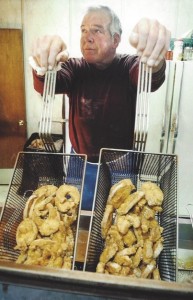 Kenneth Edwin Caviness of Hazen passed away peacefully in his sleep on October 24, 2019 at the age of 80 after a long and courageous battle with his health.  Kenneth was born September 11, 1939 in Hazen, Arkansas, the son of the late Maurice and Opal Caviness.  He was preceded in death by his parents and sister, Shirley Rogers.

As a young man, Kenneth began his love of agriculture with a job at Riceland Foods in Hazen.  Later he got his start in farming with help from his father-in-law, Frank Halijan and Everett Hall who became a life-long friend and mentor.  Kenneth was passionate about farming and he passed that on to his son and grandsons.

Kenneth loved to make others happy.  Many will remember Kenneth brightening their Christmas celebrations dressed as Santa or all the free rides he gave on his train at the local rice festivals.

Around 1984, Kenneth began frying fish for a few of the local farmers.  This pastime soon became another passion of his as it grew into Big K’s catfish barn.  Over the years, people from all over the state and beyond have made their way to the catfish barn, and Kenneth has visited with each and everyone of them.

Kenneth was a loving father and friend and he will be greatly missed by all.  Kenneth is survived by his wife, Frances Caviness; his son, Brad Caviness and wife, Lori, and three grandsons, Parker, Perry, and Pierce Caviness.  He also leaves behind a host of loving family and friends.

The family would like to extend a special thanks to Regina Staton, Angela Herrera, and LaWonda Brooks for the care and companionship they provided during Kenneth’s illness.