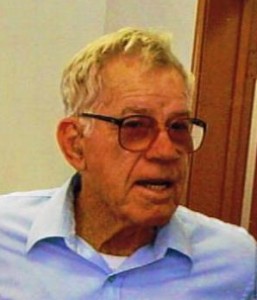 June McClintock Gresham, age 89, of De Valls Bluff, passed away February 24, 2015.  June was born June 13, 1925 in Pine Bluff, Arkansas to Joseph L. and Mabel Forrest Gresham.  He lived in Pine Bluffuntil he joined the Marine Corp. where he was severely burned over his entire body, except the bottoms of his feet, as the result of a flame thrower backfire, when thrown into a cave.  He spent much time recuperating in Guam, China, and in the Russell Islands.

June ran a skating rink in Brinkley, Arkansas for many years for his own rehabilitation and to create a clean and fun environment for teens and others and for sheer pleasure.  He taught many to skate backwards, to dance, and other unique moves.  He said many couples were married due to meeting at the rink.

Construction of Industrial buildings such as paper mills and auto plants took him to many cities in the country.

After his marriage to a school teacher, Vi, he moved  to De Valls Bluff, Arkansas where he was active in local organizations; city council, civic clubs, and a volunteer for many building projects.  June was a faithful member of the First Baptist Church.  He loved sports and was a supporter of school sports programs, as well as the De Valls Bluff Fire Dept.

June is survived by his wife of 49 years, Vi Gresham and a host of in-laws, step-son, nieces, nephews, great nieces and great nephews.  He will be greatly missed by family, friends, and the community that he served.

In lieu of flowers, the family would like donations sent to the First Baptist Church in De Valls Bluff,Arkansas or to Gideon International.

Visitation will be held 10:00 A.M., Friday, February 27, 2015 at the First Baptist church in De Valls Bluff followed by funeral services at 11:00 A.M.. Burial with military honors will be in the Oakland Cemeteryin De Valls Bluff.