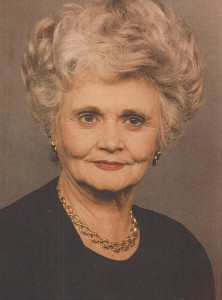 June Edmondson House, 91, died February 6, 2020, with her family at her side at her home in Lakeway (Austin), Texas.  She was born June 15, 1928 in the Hamilton Community of Lonoke County, Arkansas, to the late Baxter and Kate (Buffalo) Edmondson.  Surviving a premature birth at only 2 pounds, decades before neonatal care, she was put in a shoebox and placed on the open warm oven door- like something straight out of the Laura Ingalls Wilder books she later taught her second graders.

“Miss June” as students, doctors, and caregivers called her, was a graduate of Carlisle High School and Arkansas State Teachers College (which later became UCA). She was one course shy of completing a master’s degree.  Miss June began her 42-year teaching career in the Hamilton School.  She was one of the last two teachers to be teaching in the two-room school when it was merged into Carlisle Public Schools.  She also taught two years in Hazen Public School.

Miss June was married to Conley House of Hazen, Arkansas for 58 years and they had one daughter, Becky.  Teaching multiple generations, with high expectations for both herself and her students, she dressed like their Barbie dolls in trim fashionable dresses and her beloved Andrew Geller pumps, even on the playground.

One of Miss June’s Back to School night projects surprised parents with life-sized paper-mache’ models of their children and was featured in Instructor magazine.

Miss June loved beautiful things- clothes, flowers, paintings and throwing large parties for family and friends.  A “hostess with the mostess”, Miss June was recently described on Facebook as “one of the last grand ladies of Prairie County.”

A member of Hazen’s Twentieth Century Club and the local Eastern Star chapter.  Miss June was also active in church all her life—initially Hamilton Baptist Church, then First Baptist Church of Hazen, and finally the church of Brookdale Lakeway when she and Conley moved to Austin, Texas in 2010 to be closer to daughter Becky and her family.

A memorial service will be held at the First Baptist Church of Hazen, Saturday, February 15, at 2:00 p.m. with visitation starting at 1:00 p.m. Burial will be immediately after at Carlisle Cemetery.  Memorials may be made to Carlisle High School Alumni Association Museum, Box 455, Carlisle, Arkansas 72024 or First Baptist Church, 244 North Hazen, Avenue, Hazen, Arkansas 72064