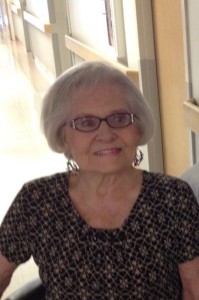 Faye Tarter Carrell, 90, of Carlisle, died Sunday, December 21, 2014. She was born in Carlisle on September 15, 1924, the daughter of Al and Opal Chandler Oliver. Faye was a business owner in Texarkana, Texas where she spent most of her life. She was instrumental in bringing Bible Study Fellowship to Texarkana. Faye was a devoted Christian who used her talents in music and teaching God’s word to women. She was a member of Family Church in Bryant.
Faye was preceded in death by her parents, an infant daughter, her son, Keith Tarter, Jr., her husband of 42 years, Keith Tarter, Sr. and her husband, Jim Carrell.
She is survived by two daughters, Lana Tarter Tollett (Alan) of Benton and Judi Tarter Jones (Terry) of Little Rock; three grandsons, Scott Tollett (Kim), Brian Jones (Amy), and Brandon Jones; one granddaughter, Tami Croushore; one sister, Odene Brandt of Carlisle and nine great-grandchildren.
Funeral services will be 11:00 A.M., Tuesday, December 23, 2014 at Westbrook Funeral Home Chapel in Hazen, Arkansas. Visitation will be from 10:00 to 11:00 A.M., prior to the service. Interment will be in the Carlisle Cemetery.
Memorials may be made to the Second Chance Youth Ranch, 21815 Interstate 30, Bryant, Arkansas 72022.