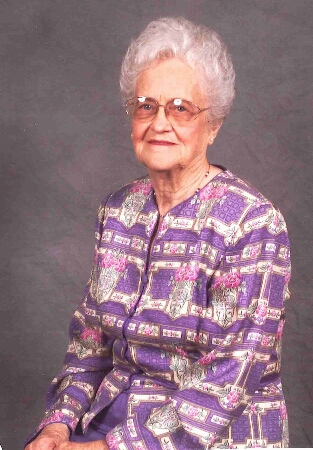 Clara Maxine Guess Weems of Hazen was born in the Brown Grove Community to John and Nettie Stanley  Guess on January 30, 1921 and went to be with her Heavenly Father on March 4, 2016 after a long illness.

She graduated from Des Arc High School in 1938 and married the love of her life, Eli Weems, in 1941.  Her husband served in the Army Air Corp during WWII and they lived in several different cities and made life-long friends.  Much later, after retirement, this group of friends met annually in various parts of the country which spurred them to travel and enjoy new areas.

In 1951, with their two children, they moved to Ft. Worth for better job opportunities.  Maxine loved being a Texan and was very involved with her family, friends, and church.  She was a great cook and a very loving mom, grandmother, and great-grandmother.  One of her greatest joys was working in the Russell Stover Candy Store when the stores were beautifully decorated and candies prominently displayed.  One of the most enjoyed benefits was being able to eat all the candy you wanted while on duty! She continued to work for them when the family was transferred to Atlanta, Georgia in 1964.  Even after retiring and moving back to Arkansas, her chocolate of choice was Russell Stover.