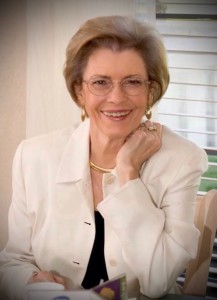 Shirley Marie Stine McMullen, 87, was at home surrounded by family when she went peacefully to her Heavenly Home on June 24, 2020. Grace, beauty, kindness and Godliness were the hallmarks of her life and she will be greatly missed.

Shirley was born in Stuttgart, Arkansas, October 8, 1932, to Clyde and Estella Stine. They moved to Des Arc, Arkansas, in 1940 where she graduated high school. She married the love of her life, William Edward (Bill) McMullen in 1950 and they had five beautiful, dearly-loved (Shirley’s words) children: Eddie (Sarah) McMullen, Stina Brown, Denise (Terry) Langston, Shawn (Paul) Holland and Mark (Robin) McMullen. Survivors also include 18 grandchildren and 48 great-grandchildren. In addition, there were many precious nephews and nieces who loved their Aunt Shirley, including her newest, dear nephew, Jim Pfeifer.

She was preceded in death by her husband, parents and siblings Ralph DuBois, Lawrence Stine and Florence Mitchell and her great-granddaughter, Waylin Harris.

For her more than 80 descendants, the highlight of every year was McMullen Thanksgiving with Gran. The traditions she started were followed religiously including making homemade noodles, taking generational pictures in front of her house, hayrides and all the cousins sleeping on the floor together in the den.

Growing up she participated in numerous beauty contests, played basketball and played the piano. For more than 40 years, beginning at the age of 16, Shirley served her church families and other local churches by playing the piano and organ.

Like all farmers’ wives, her life revolved around planting and watering and harvesting. For many years, she took meals to all of the farm workers and served them from the back of her blue Chevrolet station wagon. She also worked on the farm driving tractor trailer trucks. In the 1970’s, her love of children and fashion combined when she opened Little Things from Shirley’s, a children’s store in Hazen.

She always called herself a “Has Been” because she was past Worthy Matron of the Order of Eastern Star, past president of Hazen Band Booster Club and past president of the Twentieth Century Club of Federated Women.

Visitation will be held at 1 p.m. followed by a memorial service at 2 p.m. on Saturday, June 27, at Calvary Baptist Church, 200 W. South Front, Hazen, AR. The family asks that everyone over age 10 wear a mask. In lieu of flowers, memorial gifts may be made to Calvary Baptist Church or St. Jude Children’s Research Hospital.