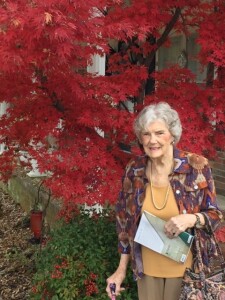 Mary Dean Skarda, 94, of Hazen entered the gates of Heaven on Saturday, May 15, 2021. She was born in the Center Point Community (Prairie County) on September 21, 1926 to the late James and Myrtle (Ewing) Sanders. A graduate of DeValls Bluff schools, she married the late George F. Skarda where they built their life in Hazen and raised their family. She was actively engaged through the years in various church, community and school organizations. With her husband by her side, she later opened Cottage Fabrics and Gifts which she spent many years enjoying. Mama Dean, as everyone called her, loved life and lived life to the fullest. Strong in her Christian faith, she cherished her family and friends and as many would agree, she never met a stranger. She could “strike up” a conversation with someone she had never met and by the end of the conversation she had gained a new friend.

Visitation will be Wednesday, May 19, 2021, at Hazen First Baptist Church from 1:00-2:00 with services immediately following at 2:00. In lieu of flowers, memorials may be made to Hazen First Baptist Church, the Czech National Cemetery, or a memorial of your choice. The family would like to extend their heartfelt thanks to the entire staff at Chambers Nursing Home for all the love and attention they gave to our mother during her stay as they called her “The Queen of Hazen.”