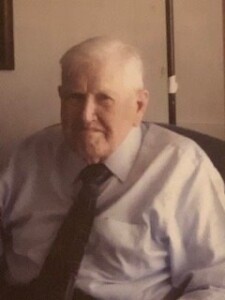 John Edward Kelly entered his “Heavenly Home” on November 8, 2020 at the age of 100 at Springhill Baptist Hospital in North Little Rock.  John was born November 21, 1919 to William Edward and Letha Stratton Kelly in the New Bethel Community of Carlisle.  He was a member and Deacon of the New Bethel Missionary Baptist Church for many years and loved the Lord very much.

John was a WWII Navy veteran and joined the Navy January 2, 1942.  He served three years, nine months, and four days.  He was assigned to the USS Roe, a destroyer that escorted and supported large ships.  He spent the rest of his life working in the farming world until he retired.

Anyone that knew “John Kelly”, automatically knew he was a true “Man Of God”, and a very special man to everyone.