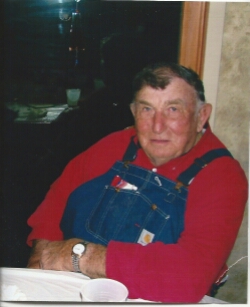 Joe Emery Caviness, 81, of Hazen, died peacefully at his home with his wife of 59 ½ years by his side.  He was preceded in death by his parents, Emery and Leona Caviness; siblings, Clotene, Clorene, Dorothy, and Harry and his beloved grandson, Jake Caviness.  Survivors are his wife, Verda Mae; children, Rhonda Caviness Martin and husband David of Huntsville, Alabama, Harlan Caviness and wife, Monica of Carlisle, and Jason Caviness and wife, Jill of Hazen; grandchildren, John and Mark Martin, Zackery Caviness, Luke and Lily Caviness; sister Ruth and several nieces and nephews and host of friends.

Joe and Verda Mae Dewhitt married April 25, 1957.  Joe’s dad, Emery, retired in 1958 and Joe and Verda  assumed operation of the Dairy.  Verda helped Joe milk cows twice a day until July 1, 2000 when all the dairy cows were sold.  Joe and Verda had milked cows for forty-two years. Joe was a well known, respected cattleman who gladly and frequently shared his experience with younger cattleman in the area.  After selling the dairy cows, he maintained a herd of cattle on the Caviness family farm that established in 1992.  Joe was proud that the Caviness  family Farm was honored with as an Arkansas Centennial Farm in 2015.

Joe will be remembered as the ultimate story teller.  He could recall and retell events of the past in vivid detail.  If Joe could have planned his passing, it would have been just as it happened.  He spent the morning working on getting his equipment ready to make the next baling of hay, ate lunch with his wife and two of his grandchildren, did a little mowing, took a nap in his living room and woke up in heaven!

Joe was a faithful member of Calvary Baptist Church.

Visitation will be at the Calvary Baptist Church in Hazen, Friday, night from 5:00 to 8:00 P.M. . Funeral services will also be at Calvary at 10:00 A.M., Saturday with Christian VanHouten, pastor officiating.  Joe’s one request for his service was that Richard Hamlin, former Calvary pastor, sing “Beaulah Land”.