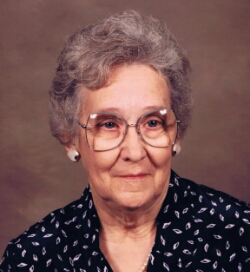 Dorothy Daloris Raborn Buffalo, 96, of Carlisle, was born September 12, 1919 to George and Elsie Raborn in Carlisle, Arkansas and she passed away Tuesday, June 14, 2016 at home surrounded by her family.

On January 30, 1941, she married Robert M. Buffalo.  For nearly sixty years, they lived and worked the farm where she was born and she continued to be involved with the farm she so loved until her death.

She was a charter member of Carlisle Progressive Club, active in Extension Homemakers Clubs for more than fifty years and could often be found having lunch with friends at the Carlisle Senior Citizen’s Center.  She and Robert raised their family in the Baptist Church where she was active for many years.

Mrs. Buffalo is survived by sons, Robert E. and Richard F. (Dianne) Buffalo both of Carlisle and her daughter, Janice (Jim) Gooch of Forrest City.

Dorothy was preceded in death by her husband, one daughter, Georgia Lee Buffalo, and granddaughter, Dr. Elizabeth Buffalo Nelson.

Visitation will be 6-8 P.M., Thursday, June 16, at Westbrook Funeral Home in Hazen.  Funeral services will be 10:00 A.M., Friday, June 17, 2016 at the First Baptist Church in Carlisle.  Interment will be in the Carlisle Cemetery.