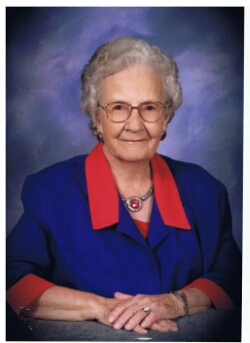 She was raised in the Gravel Hill community during the very heart of the depression; she understood what it meant to be poor.  Doris grew up on a rocky farm in hard times; an experience similar to many others of her time and place.  The days of chopping cotton, milking cows, cooking, caring for her blind grandmother, as well as other work, prepared her far better for the life she came to know than the time spent in the rural schoolhouse down the road a few miles away.

Her memory was extraordinary for dates, people, and places.  If she ever knew a fact, she didn’t forget it.  She was the family memory bank.

Doris was a quiet person with a certain innate dignity, and much preferred to be in the background and give place to others.  She found expression in service to others.

She came to Jesus as a teenager at the small Baptist church she attended in Gravel Hill, Arkansas.  Doris later taught children’s Sunday School and Vacation Bible School.  Through the years, her service also included preparing for an unknown  number of church pot lucks and Sunday dinners.

On July 4, 1942, she married Raymond Pasley at the preachers house late in the day after the preacher had finished feeding his stock.  They were married outside with little ceremony.  Yet this humble beginning did not make them feel slighted in the least, but rather happy to just be together.

They were devoted to each other until death parted them when Raymond died in 1996.  Their union produced four sons:  Larry, wife Alicia; Alton, wife Sharon; Mike, wife Jan, and Donnie, wife Janet.  There are eleven grandchildren, nineteen great grandchildren and six great, great, grandchildren.

The early married years saw several moves.  Raymond was saved in 1948 and his priorities began to change.  They started farming in 1951 and did so until 1971.

Doris was a farm wife, and while he worked on the farm, she worked in the house and raised her boys.  Raymond had the easier job.  Doris also worked for over 30 years at the Shirlyn shop in Carlisle, helping Lucy, Faylynn and Windy with the store.

At Doris’s house, there was always an ample table.  None needed to go away hungry.

There was also going to be something for us boys to snack on after school.  She always looked out for us, always.  We knew she was in our corner.

Her grandchildren loved her and she them.  Nothing was more precious in her eyes than a baby, however she never got to have that baby girl.

Her life will be remembered but by few, but to us she was our strength and our safe haven.  We were blessed to know her love and call her Granny and Mamma.