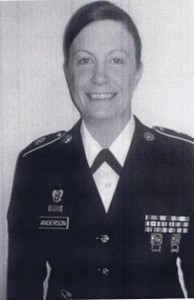 Staff Sergeant Christy Marie Anderson, 44 of Hazen, died Monday, February 6, 2017 in Killeen, Texas.  She was a graduate of Hazen High School and served 10 years with the United States Army.

Christy is survived by her mother, Janet Swindle of Hazen; daughter, Megan Anderson of Hazen and her grandfather, Otto Swindle of Carlisle.  She was preceded in death by her father, James Swindle; her grandmother, Cathryn Swindle and numerous other relatives.

Burial with full military honors will be at Peppers Lake Cemetery South of De Valls Bluff.