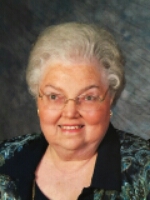 Carolyn Jane Jordan Byrum, 78, of Carlisle, Arkansas, passed from earthly to heavenly life on Tuesday, March 22, 2016, in Little Rock, Arkansas.  She was born June 9, 1937, in Dallas, Texas, to George and Myrtle Jordan.  Raised in a Christian home, she entrusted her heart and soul to Jesus Christ at an early age and faithfully followed Him all her life.  She graduated from Texarkana Arkansas High School in 1954, and attended Texarkana Junior College and Baylor University prior to graduating from Ouachita Baptist College in Arkadelphia in 1958, with a B.A. in English.

She met the love of her life, Jimmy Byrum, while serving as organist at Immanuel Baptist Church, in Texarkana, Arkansas, in 1954.  Married August 16, 1957, in Texarkana, they were blessed with 5 children, 13 grandchildren, and 4 great-grandchildren during their 58 year marriage.  The Lord called her to be a pastor’s wife and she was blessed to minister alongside her husband in churches in

Fort Towson, Oklahoma, Longview, Texas, and in Texarkana, Keo, Toltec, Ward, and Carlisle, Arkansas.  She was an accomplished musician, using her talents as church pianist and organist as well as teaching piano lessons much of her adult life.  She loved her family dearly and enjoyed spending time with them.  She also enjoyed sewing, travel, and teaching her Sunday School class.

In lieu of flowers, the family is requesting memorials be made to Trinity Chapel Baptist Church in Carlisle, Arkansas, or donations made to Operation Christmas Child thru Samaritan’s Purse.

Visitation will be held Thursday, March 24, from 5:00-7:00 PM, at Westbrook Funeral Home in Hazen, Arkansas.  Memorial service will be held Friday, March 25, at 10:00 AM, at Trinity Chapel Baptist Church in Carlisle, Arkansas, with interment to follow at Walters Chapel cemetery north of Carlisle.