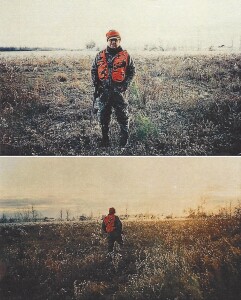 Carlos Lynn Gates, 62, of Hazen, was born August 9, 1959 in the little town of Carlisle in a little doctors office on North Court Ave. to Roy and Dorothy Gates.

Carlos Gates, my dad, lived most of his life in Hazen. He grew up on my grandfather’s farm, growing rice and soybeans. Sometime in the 70’s, dad and papa Roy got sick, we about lost papa then. Dad as a teenager had to basically take care of the farm by himself. One day during a hot summer, dad took a tractor part to a metal shop and while he was looking around, he noticed these guys working inside the air-conditioning and fans blowing. The temperature in the shop was significantly cooler than outside and dad said to himself “I can do what these guys are doing.” This started his path down tool and die.

After graduating Hazen High School in 1978, he attended SAU in Camden, where he pursued his degree in Tool and Die.

Dad would live a brief time in Oklahoma working and then moved back to Arkansas, where he would live in Searcy, working for American Tool. There in Searcy, he would meet my mother. The first time he noticed her, she was sneaking a cat into her trailer, and there was a no pet policy where they lived. Dad said he just saw the cat’s tail hanging from under her coat. They would date for a short time before being married October 24, 1981.

In June of 1985 they would have their first child, my brother, Cyle.

In about 1985, my parents would move to Hazen and start a home on our family farm. Dad would start his career at the plant in Hazen, and that factory would go through many name changes throughout the year.

In 1999 he would lose his father. It was my first real experience with death, and first time I can remember seeing this man cry. After the funeral he hugged my brother and I tight and said, “I will always tell you I love you.” Something he did until this day.

My parents would raise us together here on the farm until the spring of 2007. That year my parents would decide to go separate ways and get a divorce. Though there were some disagreements for sometime between the two; in the August of 2017 on my mother’s death bed they came to peace with one another and said their goodbyes. My stepmother was there as well, and the last words she said to my stepmom were “take care of my boys.”

Dad said once before he was glad he could come to a peaceful end with her before she passed and was glad Dennis was there to help us through it.

Dad would stay at the Hazen plant until they shut down in 2009. After the closure, my dad got by with what he could until he was offered a job at the Lonoke Remington Plant.

In about 2014, my dad would rekindle his relationship with his high school sweetheart, Joni Roe. On may 23, 2015, my dad and Joni Gates would say their vows in front of God, family and friends and become my stepmother. Joni is and has been a great stepmother and step-grandma to us and the kids and has excepted us as one of her own children, and I love her dearly for it. She has taken care of my hard headed father for these past six years, God bless her. She did not mind helping us whenever we needed it. Dad as well took in my step-siblings, Kimberly and Jacob, and did what he could for them.

That same year in 2015, my grandma, Dorothy passed away. Dad said he believed “grandma stayed just long enough to make sure we were taken care of.”

On Thursday, October 7, 2021, would be the last time I ever spoke to him. At 4:20 P.M., I called him and we spoke for 6 minutes and 8 seconds. The conversation was about muzzle loading. We talked about the upcoming opening day happening next weekend. Preparations that needed to be made and the approximate time I would be home that next Friday evening. We said I love you, and bye. He would pass away five hours later that evening unexpectedly. Changing my world as I know it.

My dad loved to hunt, fish, and work in the dirt. Things he taught my brother and I growing up. He was there when I killed my first deer, my first buck, duck, and turkey. He loved his dogs and he was pretty good at training them. Thoughout the years, we had Labradors to bird hunt, beagles to chase rabbits, and mutts to track shot deer; but most recently German Shepards and wolves.

The man was always working…it be the yard, garden, his shop, or employment. He didn’t honestly know the definition of relax. He worked to provide a good life for his family. And he didn’t think twice about spanking my brother or I as children when we got out of line.

His grandchildren were a game changer for him and he loved being called “Papa Carlos”. He spoke to my daughter Wednesday and Carly told him “night night Papa, love you.” Dad just giggled and said it back.

If you truly knew dad, you knew he was stubborn as they come. He had true grit and worked until his bones hurt. We’re going to miss you dad. I love you. Thank you for everything you have ever done. You were hard on me a lot, but I know it was to make sure that when this day came I could get through it.