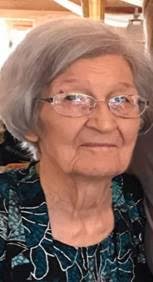 Betty Bednar, age 89, of Carlisle was relieved of her pain and suffering to be with the Lord on October 12, 2021. She was born to the late Paul and Vlasta Marek on August 6, 1932 in Slovak, AR. She was preceded in death by her husband of 51 years, Robert Bednar and two older sisters, Evelyn Chlapecka and Irene Elam.

Faith and family were the purposes of life for Betty. She was a devout Catholic and devoted mother and grandmother who loved her family and taking care of their needs no matter what age. She lived for special occasions and holidays. No matter how much work it was, the special memories out weighed her hard work preparing them. The last five months of her life were spent at Chambers Nursing Home in Carlisle under the care of a comforting staff who gave her special memories as well.

Visitation will be Saturday, October 16, 2021 from 9:30 to 10:30am at St. Cyrial and Methodius Catholic Church in Slovak, AR. Rosary will begin at 10:30am before the funeral mass. Interment will be at Slovak Catholic Cemetery by Westbrook Funeral Home of Hazen, AR.