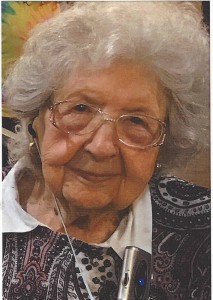 Anne Craig Lumpkin, age 100, of Little Rock, died July 24, 2019. She was born on April 3, 1919 in De Valls Bluff. She was preceded in death by her parents, Claude and Lou Craig Lumpkin; sisters, Elna Weedman, Lexa Widener, Lucy and Martha Lumpkin, and brothers, Claude, Bill, and Leroy Lumpkin. A member of American Women in Radio and Television, she worked at radio stations in Dallas, Denver, and as Executive Administrative Assistant at KLRA radio in Little Rock for 25 years and KLRT television for 8 years before retiring. The funeral service will be at 2:00 P.M. Saturday, July 27, at Westbrook Funeral Home in Hazen with interment to follow at Oakland Cemetery in De Valls Bluff. Anne will be greatly missed by her loving family and those whose lives she touched.