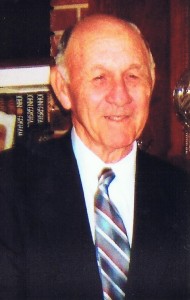 William (Bill) V. Meiner, Jr. of Hazen, died of cancer of Monday, December 8, 2014 at the age of 83.  He was born on March 28, 1931 to Will and Mabel Meiner.  He was give the nickname of “Doodle” at an early age and many still called him by that name.  He began farming when he was very young with his dad and brother and after the death of his dad, he and his brother continued to farm together until their retirement.  He was active in many farm organizations during that time.  He was a member of the Hazen First United Methodist Church, a 32nd degree mason and a member of the Hazen Lodge for over 50 years.

In addition to his parents, he was preceded in death by a son, Doug Meiner.  He is survived by his wife, Bobbie Guffey Meiner; a brother, Gerald (Nye) Meiner of Hazen; a daughter, Stephanie (Mark) Rumfelt of Kentucky; a granddaughter, Jessica Williams of Oklahoma and a special niece and her boys, Kim, Brady, and Weston Smith of Jonesboro.